How To Hit A Bunker Shot Consistently

Not sure how to hit a bunker shot? We’ve got you covered.

Are you tired of feeling that pit of despair in your stomach when you see your ball sail toward a bunker? Sick of having to warn your group to “Look alive!” before you make your swing inside sand traps?

The truth is, bunker shots require a very different approach than every other type of golf shot, and every golfer feels these “unsure” emotions when faced with a shot they haven’t confidently practiced.

Thankfully, with the proper technique and instruction, we’ll break down in our guide today, bunker shots will become a challenge you embrace facing on the golf course.

Quick Summary On The Basics of Hitting A Bunker Shot

BUNKER BASICS: HOW TO HIT A BUNKER SHOT FOR BEGINNERS

As a golf instructor, I specialize in teaching beginners how to get started in golf. I see how embarrassing a sand shot can be for newbies. Before we get into Bunker Basics, I have good news for you!

When it comes to getting out of a bunker, a proper sand wedge will do 90% of the work for you. More on that later.

What Makes Bunker Shots Difficult for Many Players?

Bunker shots often feel more complicated than they are to beginner golfers because proper sand technique is rarely taught.

The most common problems beginners have in sand traps come from a lack of instruction including:

As a beginner golfer, using your sand wedge or lob wedge with a loft ranging between 56° and  60°+ will be the best clubs for most of your bunker shots close to the green. Loft and bounce (the angle created between the leading edge and trailing edge of the wedge) are your best friends with bunker shots. Golfer’s sand and lob wedges have the most loft and bounce in a player’s golf bag, making them the easiest tools to use.

Higher bunker faces/lips or sand shots that need to get high quickly and land softly will be less difficult with a higher lofted lob wedge. More “standard bunker shots” (5 to 20 yards) with little height required to reach the green safely can be efficiently executed with a player’s regular sand wedge.

Be sure to stick around until the end of our article, where we talk about one of our favorite wedges of the 2022 season that has built-in features to make bunker shots even easier for its users!

A few unique steps are required to create a perfect bunker setup before making a swing. Nearly all this advice is only helpful for bunker shots, furthering the idea that a specific technique is needed for the sand game alone.

* Crucial bunker setup and swing tip! * Players should have 70% of their weight on their leading leg throughout the entire bunker swing and even more through and after impact. Weight on the rear leg at the address or during the swing results in the wedges leading edge being unpredictable,  leading to chunky or thinned shots.

Two things are essential to hitting consistent successful bunker shots: 1. The bounce of the wedge contacting the sand first to propel the ball forward, not the leading edge. 2. Maintain a  high loft throughout the swing by releasing the club head past your hands through impact.

Golfers will know they’re using the bounce correctly when they hear a distinctive “thud”  sound when the club contacts the sand. Additionally, divots with proper bounce use are usually shallow and flat, whereas leading edge divots will be deeper and more angular.

What About Wet Bunkers?

More often than not, you’ll run into wet bunkers from the previous day’s rain. If it’s wet, you can sure bet that the shot you take with a wet bunker will be slightly different. That’s because the wet sand would be heavier and result in the acceleration of your swing being reduced.

To play a wet bunker effectively, here are some tips:

A wedge’s bounce angle is the angle between the trailing edge and the leading edge of your golf wedge and its main purpose is to prevent the club from digging too much into the ground when you’re hitting the sand.

Usually speaking, lower bounce wedges are better for firmer conditions and golfers that tend to take fewer divots. The video above by Mac McLeod shows this perfectly. Just note that the bounce you get on your wedge depends on the bunker conditions you encounter on the course. At times it may be good to have two wedges, one with a higher degree of bounce and the other lower to ensure you’re able to play effectively in both types of sand.

Old-school teaching would tell beginner golfers to aim their feet 3-15 feet left of the target, open the face, and slice across the ball. Modern instructors have found that aiming the feet parallel or even right of the target and releasing the hands fully through impact (using the bounce properly), and swinging towards the target gives players a better chance of consistently getting good results out of the sand.

The video above shows the current World No. 1 Rory McIlroy explaining how he built more consistency and predictability into his sand game by perfecting his setup! Credits to the Me And My Golf Youtube Channel.

BONUS PRO BUNKER TIP: Make sure you always swing through to your finish into a natural follow-through. The weight of the club head is designed to help you. Don’t fight your club. Keep your arms loose.

As a beginner, you may continue to feel awkward and uncomfortable with bunker shots for a while. That is normal. One way to feel more accomplished and skilled is to maintain the bunker-like an expert player. Here is how:

Picking the Right Sand Wedge for the Job

We touched briefly on the ideal wedge for greenside bunkers shots. For a quick recap, let’s dive into more detail on the essential components that made a good sand wedge that’ll help you get out of the bunker more easily.

Here’s why we love the Titleist Vokey SM9 Wedges

Picking the right wedge for the job is also key to hitting out of the bunker. For absolute newbies to the sport, in most cases don’t use a 7-iron, or any iron for that matter when you’re stuck in the bunker! You’re go-to is the sand wedge.

If you’re looking for one of the best sand wedges that are going to help you in the bunkers significantly, we’d recommend grabbing the Titleist Vokey SM9 Wedge.

Without a doubt, Titleist manufactures some of the most sought-after wedges in the golfing community. That said, their Vokey line of wedges stands as the holy grail of the wedge category. In terms of attention to detail, quality of the build, forgiveness, and versatility, the Vokey SM9 stands above every other wedge right now.

The only downside? Well, you guessed it! Being a top-of-the-line Titleist golf club, the Vokey SM9 wedge will be priced at the higher end of the market. However, if you’re looking for something that would stay in your bag pretty much forever and take your bunker game seriously, then the Vokey SM9 won’t fail you.

What Changes to Hit Shorter or Longer Bunker Shots?

The speed of your golf swing and the length of your follow-through will drastically affect the distance the ball carries out of the sand. For example, for a short-sided bunker shot that only needs to carry 3-5 yards, I would use a 60° wedge, take a fast half swing, and abbreviate the follow-through to *hopefully impart more spin on the ball.

For a 20-yard bunker shot, I might use my 56° wedge and a longer, more flowing swing with a long complete follow-through to generate more carry and even roll once it hits the green.

How Do You Make a Bunker Shot Release and Roll After Hitting the Green?

If you’ve been around the game of golf long enough, you’ve likely heard the phrase “chunk and run.” This is the exact concept players should use when they want a bunker shot to release after it hits the green. Once you’re confident in your ability to hit the sand where you want to, make slightly steep and deeper contact behind the ball, and watch it run once it hits the putting surface! More sand between the club face and the ball results in less spin, meaning more roll!

Why can’t you use a pitching wedge out of the bunker?

Why can’t you take practice swings in the bunker?

This is simply one of the rules of golf. As you advance in your game, you will want to know the rules to avoid penalty strokes.

Can I practice bunkers at a beach?

Surprisingly, we’ve tried this before and yes you can! However, make sure there’s no one around or nearby that you may accidentally drop a golf ball on. Also, if you do decide to do this, practice at a patch of flat and fluffy sand.

Most golfers have no confidence when hitting out of the bunkers because they don’t have the experience, practice, and information to execute a proper bunker shot. However, if you take what we taught you above and start practicing at ranges with bunkers for you to practice, or simply start challenging yourself more frequently on the golf course you’re sure to see improvement!

If you liked what you read here, check out some other articles you may like: 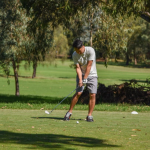